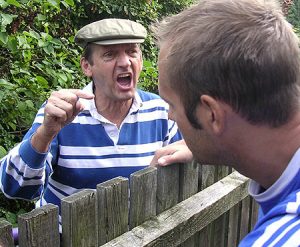 There are two areas (possibly more) of law the really seem to hit people personally: neighbor disputes and landlord/tenant disputes.  You might say it just hits people…close to home.  It gets personal fast.

Some of the areas of controversy between neighbors include but are not limited to:

Civil Code 841 states that, “Adjoining landowners shall share equally in the responsibility for maintaining the boundaries and monuments between them.”  This often times leads to controversies about the fence.  Should an old fence be replaced?  What kind of fence should be put in?  How much is a reasonable amount to spend?  Civil Code 841 attempts to add civility to the equation by providing notice and a mechanism for joint payment.  Often people want an attorney letter written in this type of case.  Nevertheless, they are generally smalls claims cases (under $10,000.00 in controversy) and you cannot use an attorney in court for small claims cases.

A spite fence is essentially an overly tall fence or obstruction (could be a tree or a hedge) which is put in place to harass or annoy a neighbor.  Civil Code Section 841.4 states, “Any fence or other structure in the nature of a fence unnecessarily exceeding 10 feet in height maliciously erected or maintained for the purpose of annoying the owner or occupant of adjoining property is a private nuisance.”  It has to be tall and malicious.

Trespass is the entering of another’s property and causing damage to the other person or property.  A trespass can be liquid or noise.  We have seen cases of trespasses where a neighbor reached over the property line to trespass.

Nuisance is similar to trespass but relates to creating a condition or permitted a condition to exist that is harmful to health or indecent or offensive to the senses or was an obstruction to the free use of property, so as to interfere with the comfortable enjoyment of life or property.  Nuisance is a little more opaque than the physical nature of trespass, but the two are often grouped together.  The first nuisance trespass case I saw related to excessive dog poop in the back yard.

Encroachment is another way to express a permanent or more permanent trespass.  An example would be building a private deck over the property line of your neighbor.

Unfortunately, we get a lot of calls asking for help getting a TRO or preliminary injunction against neighbors.  The sad reality is that neighbor relations can get violent.  TRO’s are serious matters and costly, but can be pursued in pro per (without an attorney) or with an attorney.